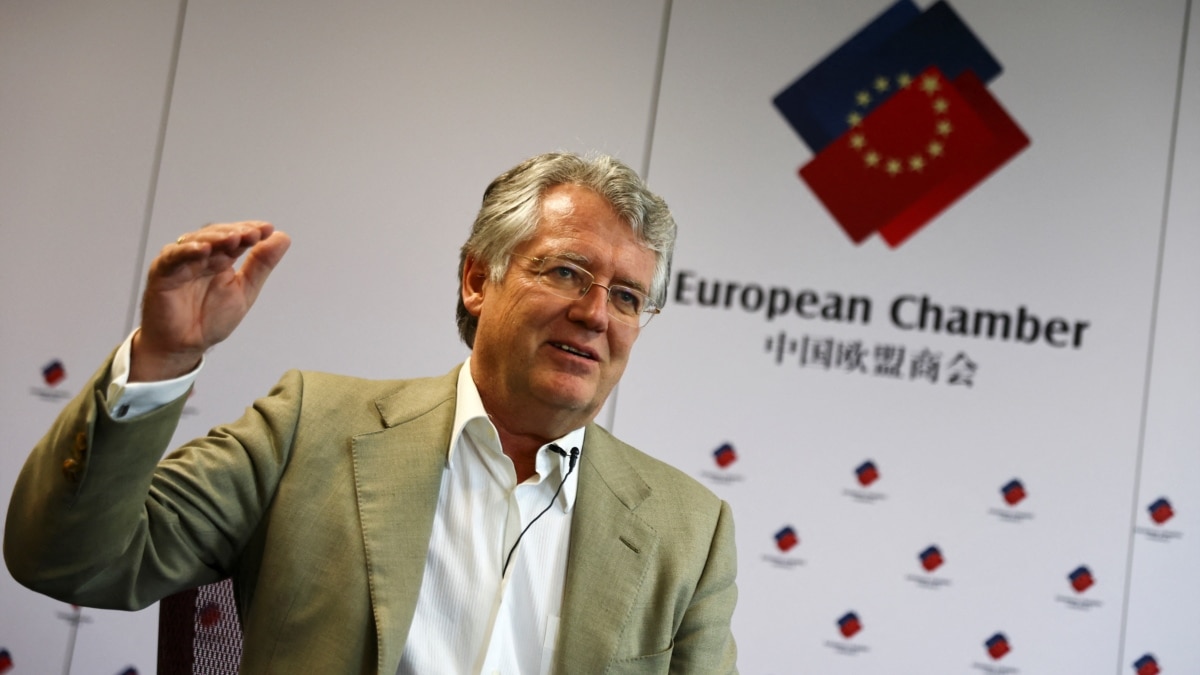 German Chancellor Olaf Scholz is due to meet Chinese President Xi Jinping on Friday. Scholz is leading a delegation of business leaders as the first EU leader to visit China since the start of the COVID-19 pandemic. The visit comes less than two weeks after Chinese leader Xi Jinping won an unprecedented third term.

VOA’s Mandarin Service interviewed Joerg Wuttke, President of the European Union Chamber of Commerce in China, on October 27. Wuttke, who has spent some 30 years in China, is a respected observer of the world’s second-largest economy who says Xi Jinping is clearly picking a senior loyalist adviser, and some have far less experience in their roles than their predecessors. Wuttke says that has increased uncertainty about how they will handle their new leadership responsibilities at a difficult time for China’s economy.

This interview has been edited for length and clarity.

VOA Mandarin: Obviously this great moment has passed. The Party Congress is now behind us. What was your first impression or reaction to the members, names of the new Politburo Standing Committee and the Politburo?

Jörg Wuttke: It was definitely a surprise. We have greater clarity now; it’s obviously Xi Jinping taking the lead to an extent we haven’t seen before. He has lined up a group of people who are totally loyal to him. We have basically left the sphere of achievement and meritocracy. It’s all about loyalty. And we have to see where this group of people takes China.

VOA: The premiership goes to Li Qiang, who is currently Shanghai’s party leader. Tell us about your impression of Li Qiang.

Wuttke: Well, I’ve never met Li Qiang, but what concerns me more than an individual is the fact that since 1988, we have never seen a prime minister take office who did not follow his predecessor. So in a way, we have for the first time someone, running a city, becoming head of the state council, which of course is a whole different ship to sail. So I guess it’s going to be very difficult. Also, the head of the economy, Mr. Xuexiang Ding, will be someone who is not knowledgeable about business.

VOA: Besides Li Qiang as premier, there are other important people to replace the current members of Xi Jinping’s economic team. How about those people?

Wuttke: Yes, we are in a turbulent time here. We have a real estate crisis. We have a severe impact from US sanctions. We have an increasing debt burden in localities as well as uncertainty as to when we will emerge from this COVID lockdown. It would be great to have a stable and good communication team on the economic front to tell the market where we are heading. And we don’t. We are essentially entering a period of uncertainty. But the uncertainty is intentional. The president decided to have a group of loyalists with him in the Politburo. So let’s see at the end of the day and whatever happens or doesn’t happen is under President Xi’s watch.

VOA: I think on another occasion you spoke with other media, you talked about the fact that the Chinese Communist Party is not monolithic. There are a variety of views. Some are more liberal, more pro-market and others like Xi Jinping himself are more pro-state. After this reshuffle, the changing of the guard, do you think there will be more liberal voices in the next administration?

Wuttke: Well, there will always be different voices and the fifty shades of gray about where to run the country. But it is already very clear in the speech of (Xi) (before the party congress). (Xi Jinping) mentioned Karl Marx 15 times. He mentioned the market three times, which clearly indicates that he expects international tensions. He mentioned the struggle 17 times and 12 times in the context of international affairs. Thus, he prepares the country for the struggle, and the struggle means…uncertainty and difficult times. He is obviously trying to rally the population behind him. And we have to see where that leads. We have a meeting with the (German) Chancellor Scholtz next week. The arrival of the German chancellor could give a clue if Xi Jinping wants to engage with foreign countries, with Europe in particular, as he has been off the scale for 1,000 days. (It) will be very interesting to see how this kind of view of the struggle translates into engagement with foreign leaders. Is he trying to adapt? Is he trying to reconnect with them on positive terms? Or is it going to be all about, you know, wrestling and offense in a way?

VOA: Compared to four or five months ago, are you now more pessimistic or are you about the same or more optimistic for the next, say, three or five years?

Wuttke: I think my struggle is trying to be realistic in order to (see) which direction it might go. We have not entered the space where we know where we are going. I have been here for about 30 years. I grew up in overture mode by Deng Xiaoping. My first Party Congress that I personally attended was in 1982, where Deng Xiaoping was clearly trying to integrate China, open up and so on. But maybe at the end of my career in China, I have to see China closing in to some extent. So in a way it’s come full circle, which of course is disappointing. But at the same time, it’s their country, their choice.

VOA: Do you envisage a decoupling on the road? How confident are you, as a member of the business community, of this new leadership, particularly on the economic front?

Wuttke: Decoupling is difficult to achieve because China is the story of globalization, which means that China is deeply embedded in very many markets. But decoupling is in the cards (and) can only be achieved in small incremental steps. Fortunately, because we want to stay coupled. We want to be connected. So in a way we have a situation where when you talk about struggle, when you talk about autonomy, that’s a strong indicator that China actively wants to decouple. It would be very sad. I think that would actually mean lower growth potential and will certainly have a negative impact on the global economy as well. Will it stop there? I’m not sure, but we will definitely see small steps in that direction. Let’s hope pragmatism and reason prevail because we have too much to lose, frankly, if we decouple.

Wuttke: We are seeing more people leaving China, that is clear. We do not see business people leaving in the sense of (of) business departures. We see more engagement on the top 10, for example, of European companies. It’s mostly German. It’s mainly cars, chemicals, mechanics, machinery. Because there is no other China, there is no other choice. They need to be here, and they need to be even more engaged there.

But then 10 companies do not necessarily represent 1,800 members represented by the European Chamber. We haven’t seen any companies walk away and I don’t expect that, but what we’ve noticed is that new investment, additional new business from those companies that normally would come to China has been redirected to other regions. So we see more interest in Thailand, Southeast Asia, India, but even closer to home, Turkey and Eastern Europe, for the simple fact that executives can get in and out easily. They also realized that the World Bank has predicted that China will grow this year by 2.8% and the rest of Asia by 5.3%. These leaders follow the money and therefore there will be no exodus of European companies out of China. But we will certainly underperform given the potential of this economy.

VOA: In your opinion, do you think the Chinese leadership, especially Xi Jinping himself and his other senior advisers, are aware of the situation that their economy is not in good shape and foreign companies are leaving, or at least put (new) investments on hold?

Wuttke: I think they have to be aware of that, that they have smart ministries, consultants and advisers. But again, if you have a totally different political approach, then actually, you know, foreign affairs doesn’t mean much to you. Yes, you needed it to make sure you could bridge the technology gap. But he had made it clear that he was focusing on state-owned companies. Its primary objective is not necessarily growth. It is a question of security, of stability. It is about the distribution of wealth. It is about common prosperity. In a way, they seek more stability and are ready to pay the economic price for it.

VOA: You said it was the end of an era for China.

Wuttke: Yes. Obviously, Jiang Zemin, the era of Hu Jintao was the era when it was about integrating China peacefully. It was about becoming rich first and then powerful. But now, basically, as Mao unified China and Deng Xiaoping enriched it, it seems that Xi Jinping’s emphasis really makes China powerful.

Adrianna Zhang contributed to this report.