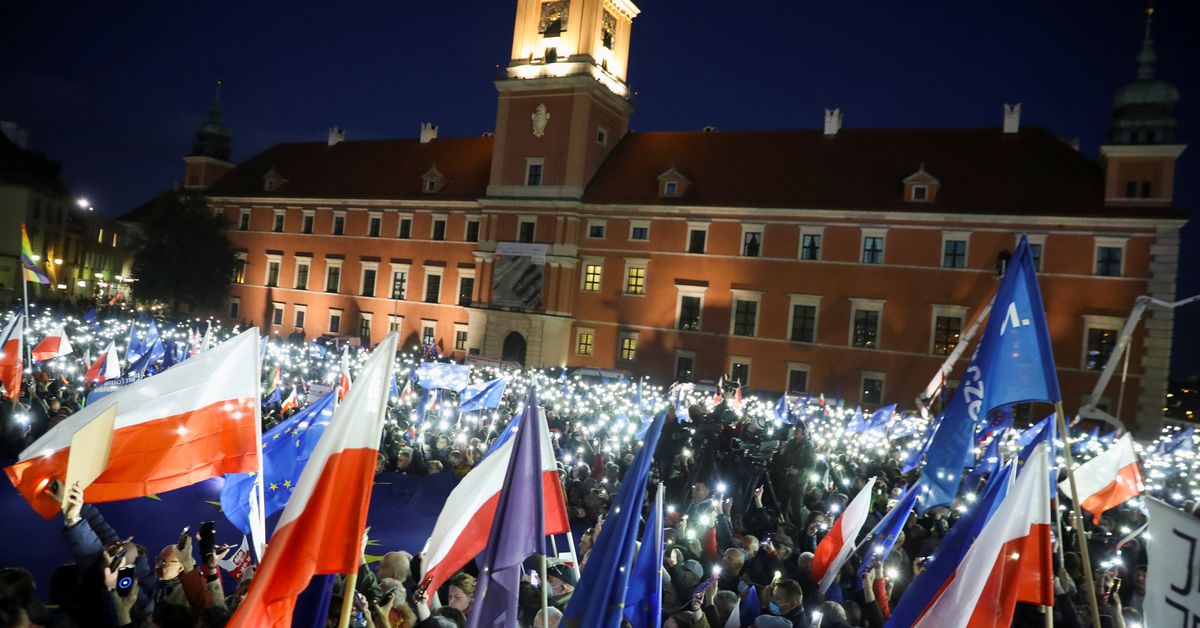 WARSAW, Oct. 10 (Reuters) – More than 100,000 Poles demonstrated in favor of joining the European Union on Sunday after a court ruling that parts of EU law is incompatible with the constitution has raises fears that the country leaves the bloc.

Politicians across Europe expressed dismay at the Polish Constitutional Court’s ruling on Thursday, which they saw as undermining the legal pillar on which the 27-country EU rests. Read more

According to the organizers, protests took place in more than 100 cities in Poland and in several cities abroad, with 80,000 to 100,000 people gathered in the capital Warsaw alone, waving Polish and European flags and shouting “We are staying. “.

Donald Tusk, former President of the European Council and now leader of the main opposition Civic Platform party, said the policies of the ruling Law and Justice (PiS) party were jeopardizing Poland’s future in Europe.

PiS says it does not have a “Polexit” project.

But right-wing populist governments in Poland and Hungary have found themselves increasingly at odds with the European Commission on issues ranging from LGBT rights to judicial independence.

â€œJust as Brexit has suddenly become a fact, something that no one expected, the same can happen here,â€ said Janusz Kuczynski, 59, standing on a street in Warsaw’s historic district leading to the Royal Castle.

Welcoming the court ruling on Thursday, Polish Prime Minister Mateusz Morawiecki said every member state should be treated with respect and that the EU should not be just “a grouping of those who are equal and more equal”.

State broadcaster TVP, which critics say focuses heavily on presenting the government’s point of view, broadcast a ticker saying “protest against the Polish constitution” during its coverage of Sunday’s events.

Speakers at the protests included politicians from across the opposition, artists and activists.

“This is our Europe and no one is going to get us out of it,” said Wanda Traczyk-Stawska, a 94-year veteran of the 1944 Warsaw uprising against the German Nazi occupiers.