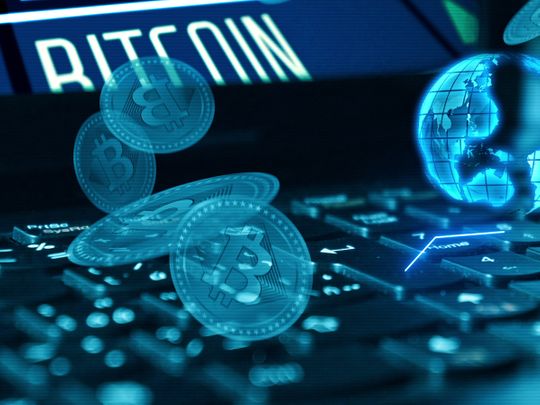 Bitcoin plunged along with other cryptocurrencies on Saturday, another indication of the risk aversion sweeping financial markets.

Ether, the second largest token, fell 17.4% before narrowing the recoil to around 10%. The global crypto industry lost about a fifth of its value, slipping to $ 2.2 trillion, according to tracker CoinGecko.

Fluctuations in cryptocurrencies come in the midst of a volatile period for the financial markets. Soaring inflation is forcing central banks to tighten monetary policy, threatening to reduce the tailwind of liquidity that has lifted a wide array of assets.

The omicron variant of the coronavirus has also led to risk aversion in the face of concerns about what this could mean for the global economic reopening.

Global stocks are down more than 4% from November’s all-time high, while safe-haven securities like Treasuries have rallied.

Some leveraged Bitcoin buyers were flushed out in Saturday’s crash, according to Vijay Ayyar, head of Asia-Pacific with the Luno crypto exchange in Singapore.

â€œMarkets have also been nervous with all the uncertainty around omicron, with cases now appearing in many countries,â€ he said. “It is difficult to say what this means for the economies and the markets and therefore the uncertainty.”

About $ 2.4 billion of crypto exposure, both long and short, was liquidated on Saturday, the most since September 7, according to data from Coinglass.com.

Bitcoin, famous for its volatility, has lost around $ 21,000 since it hit a record high on November 10.

But it’s still up over 60% this year, a return that outpaces many other assets – and Salvadoran President Nayib Bukele said the country had bought the decline again, adding 150 coins. The nation adopted Bitcoin as legal tender this year.

â€œAs usual, since cryptocurrency traders deploy leverage, it results in cascading sell orders and liquidations,â€ said Antoni Trenchev, co-founder of cryptocurrency lender Nexo. â€œWe should find support around $ 40,000 to $ 42,000 and then rebound in line for a year-end rally. If that doesn’t hold, we may revisit July lows of $ 30,000 to $ 35,000. . “